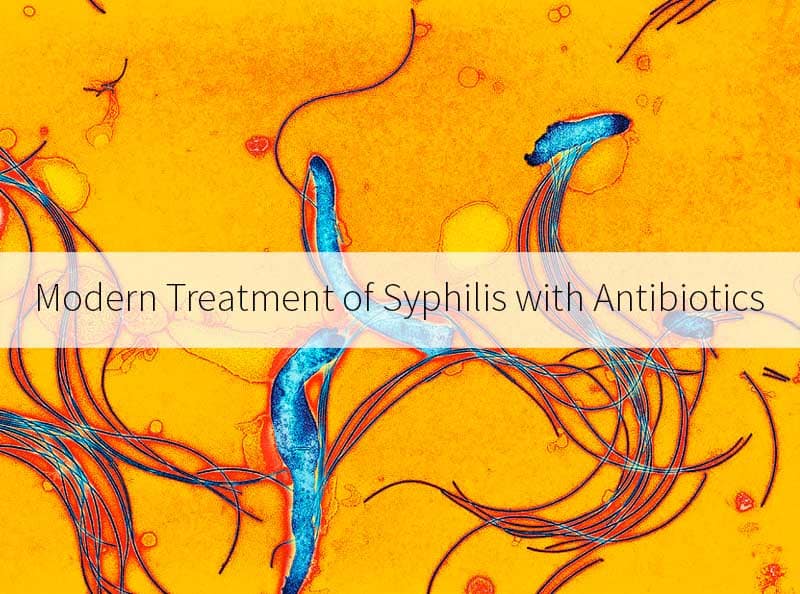 Syphilis is a dangerous sexually transmitted disease that may cause serious complications in the later stages of the infection. Despite this, it is considered one of the more easily treated bacterial infections. However, in earlier times, there was effective or curative treatment for syphilis, and doctors have throughout the course made lots of attempts to cure the disease with different agents and chemicals.

For example, it was common to use mercury as an important part of treatment for syphilis during the 1800’s. This cured the patients, but caused many adverse and serious complications, as a result of mercury poisoning. This form of therapy was eventually taken over by the arsenic-based drug Salvarsan (Arsphenamine). Unfortunatley, it also caused a lot of adverse and toxic side effects.

Mercury-based treatment strategies continued until the early 1900s, when the physician Julius Wagner-Jauregg discovered that syphilis bacteria do not tolerate temperatures above 40 °C. This gave him the idea to provoke hot flashes in patients by infecting them with malaria, because this parasitic disease could easily be treated with quinine, after all the syphilis bacteria were dead. This work resulted in a Nobel Prize in 1927, and remained the gold standard for treatment of syphilis, until it was abruptly replaced by penicillin in the 1940s.

Today, the Penicillin G is the first choice for all treatment for syphilis. However, it often needs to be be supplemented with other types of antibiotics because bacteria can lie dormant in tissues where penicillin fails to penetrate. This means that the treatment strategy should primarily be governed by a stage of the disease. It is not unusual to individualize treatment if the patient is pregnant, HIV-infected, allergic to penicillin or experiences other serious symptoms of syphilis. Therefore, the physician has to examine the patient further by taking samples of blood and spinal fluid, in order to determine the composition of different antibody for syphilis. This way, doctor can estimate the stage of disease and if the bacteria has spread to the central nervous system. Based on this information, doctor can choose which regimen for treatment of syphilis is best for the patient.

Different Strategies of Treatment of Syphilis

It is common to have a treatment strategy of Penicillin G in the early stages of syphilis disease. However, the pattern and duration of the treatment regimen depends on the patient’s age and health condition. For example, it is common for adult patients to receive Penicillin G intramuscularly as a single dose. Children, on the other hand, might be treated with the intravenous medication. In cases when the patient is allergic to penicillin, another type of antibiotics might be chosen.

In the earliest stages of this disease, one needs only a single dose. During the later stages of the disease, the patient often receives repeated doses at weekly intervals. It may also be necessary to select another type of antibiotic, especially if the patient is suffering from neurosyphilis. It is important to be aware that some patients may respond with a fever-like reaction within the first 24 hours after the start of  treatment, reminiscent of penicillin allergy. It is caused by the syphilis bacteria that emit fever-causing substances when they are killed by antibiotics. This is called Jarisch-Herxheimer reaction.