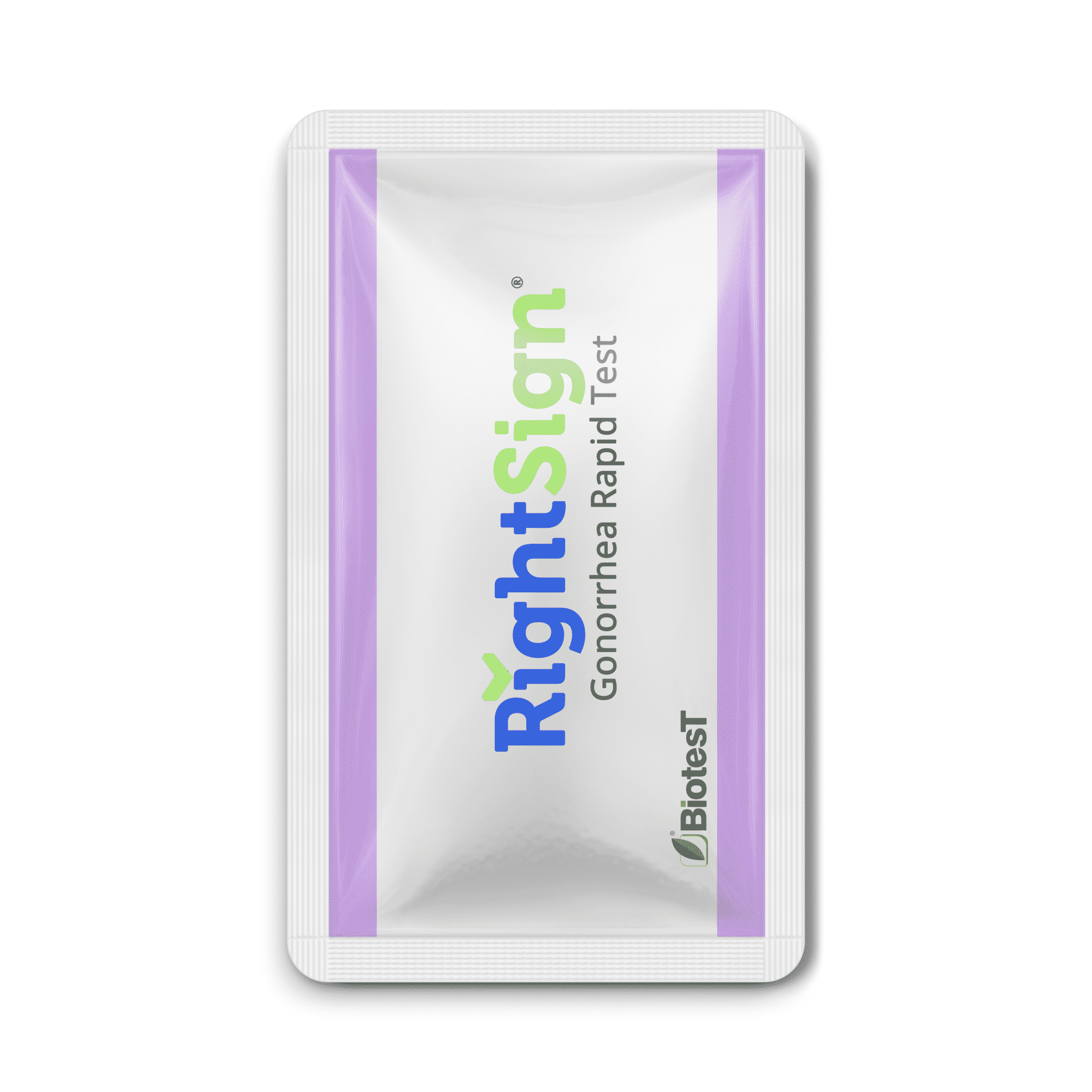 The Gonorrhea Rapid Test Cassette (Cervical/Urethral swab) is a rapid chromatographic
immunoassay for the qualitative detection of Neisseria gonorrhoeae in female cervical swab
and male urethral swab specimens to aid in the diagnosis of Gonorrhea infection,

In the gonorrhea test, antibody specific to the Gonorrhea antigen is coated on the test line region of the test. During testing, the extracted antigen solution reacts with an antibody to Gonorrhea that is coated onto particles. The mixture migrates up to react with the antibody to Gonorrhea on the membrane and generates a color line in the test region. The presence of this colored line in the test line region indicates a positive result, while its absence indicates a negative result. To serve as a procedural control, a colored line will always appear in the control line region, indicating that proper volume of specimen has been added and membrane wicking has occurred.

The prevalence of Gonorrhea had a peak during the 1970s. After this period, there was a significant decline in the number of people who were diagnosed with STD. Unfortunately, it has been found that there is now an increase in the prevalence of the condition again, with an estimated 800,000 people in the United States affected by the infection each year. There were 44,676 diagnoses of gonorrhea reported in 2017 in the UK, a 22% increase (from 36,577). The number is most likely much higher, since these numbers only reflect reported cases.

How To Use Gonorrhea Rapid Test

One of the biggest issues faced with Gonorrhea is the fact that a significant number of people infected may not know that they have this particular STI until serious complications develop. This is especially the case with pregnant women, where the infection may transmit to the baby during childbirth. In these cases, the newborn may face certain risks that could have a long-term impact on their well-being and quality of life.

What Are The Symptoms Of Gonorrhea?

Gonorrhea often does not cause a person infected with the bacteria to experience any obvious symptoms during the early stages. There are, however, some cases where symptoms may develop – individuals who have had unprotected sexual intercourse should lookout for these signs of Gonorrhea and take appropriate action to reduce their risk of complications.

Men who are infected with the bacteria that causes Gonorrhea may experience these symptoms:

If a woman is infected with Gonorrhea, the following symptoms may occur:

It is important to note that the bacteria behind the Gonorrhea infection may also affect other parts of the patient’s body. Symptoms of the infection in other regions, apart from the reproductive tract, will be similar in men and women, and may include:

Why Get Tested For Gonorrhea?

Testing for Gonorrhea is important due to the fact that symptoms are often not present, yet the infection can lead to serious complications. Both men and women face a risk of infertility if they are infected with the bacteria that causes this STD, and it is left untreated. Women are also at risk of pelvic inflammatory disease, which is considered to be a serious condition. When the infection affects the joints, there is also a risk that it may spread to other areas of the patient’s body – this happens when the bacteria enters the patient’s bloodstream.

Pregnant women are also advised to get tested as Gonorrhea is known to cause harmful complications in newborn babies. The condition can lead to blindness, as well as infections and sores that affect the scalp of the baby.

Testing for Gonorrhea is relatively simple. A urine test can be used to detect the bacteria in the urethra of the patient. A swab may also be used for a more specific test, such as to see if the bacteria may be present in the patient’s rectum, throat, or the vagina.

When To Test For Gonorrhea

While Gonorrhea often does not cause initial symptoms, individuals infected with this STD face serious complications when the condition is not treated. Initial infection tends to affect the urethra, throat, or rectum, but can later lead to complications that may ultimately cause infertility. Babies born to infected mothers also face several potential risks, including blindness. The seriousness of this STD should not be underestimated.

With unprotected sex the risk of have been infected with an STD is always prevalent. We recommend everyone below the age of 25 to test regularly, and otherwise test after unprotected sex. If you are uncertain about your STD status we also recommend to test for gonorrhea together with chlamydia, since these STD’s often are prevalent together and are very similar in symptoms.

When To Consult A Doctor?