Home » Articles » STD » Chlamydia » What Happens If You Have Chlamydia For Too Long? 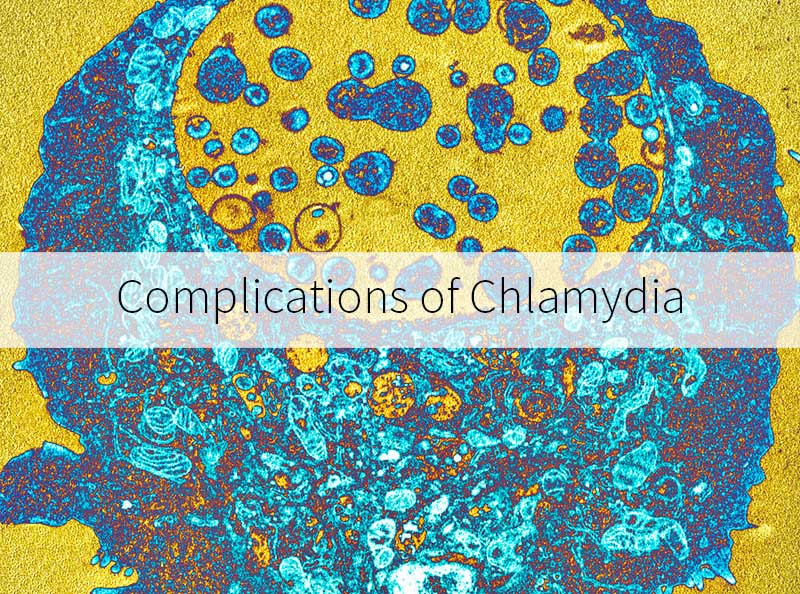 Some sexually transmitted infections are much more prevalent than others – and chlamydia is an excellent example of one common STI that affects millions of people. Almost two million people are infected with chlamydia bacterial infection each year in the United States.

Even though chlamydia falls within the four major bacterial infections currently considered curable, the condition can cause long-term complications in both men and women if it goes untreated. The major concern that does come to mind here is that many people with chlamydia infection do not experience any obvious symptoms. Without the presence of symptoms, many fail to be tested for the infection – leading to a higher risk of complications.

In this post, we take a closer look at the complications that both men and women are at risk of if they fail to obtain adequate treatment for the presence of a chlamydia infection. We also provide an overview of common symptoms that may signal chlamydia – patients need to take action if they notice these signs, especially if they participated in sexual intercourse prior to the development of such symptoms.

The Complications Of Untreated Chlamydia

In the majority of cases, the use of antibiotics has been shown to act as an effective treatment for patients infected with chlamydia. Many people do not have symptoms, however – which is why testing for the condition, especially in sexually active men and women, should be important. Take a look at chlamydia syptoms with pictures, where you can see how the diesease looks like in real life.

Both men and women need to understand the potential complications that can happen when they are infected by chlamydia. While there are some short-term complications like an infection in the urethra, a number of long-term adverse effects are also to be taken into account here.

Women are at a higher risk of experiencing long-term risks and complications when a chlamydia infection is left untreated. Unfortunately, particularly in women, the complications that develop due to untreated chlamydia is often also silent – which means symptoms of these adverse effects may only develop once the damage has been dealt with.

Women are also prone to develop chronic pelvic pain if they have chlamydia that is not treated at an early stage. The pelvic pain may even continue to remain present after the infection has been treated at a later stage.

Another concern regarding pelvic inflammatory disease as a complication of untreated chlamydia is the fact that the condition can cause damage to the female patient’s fallopian tubes. These tubes play a critical role in the reproductive process – when they are damaged, the patient’s fertility may be adversely affected. Women may also be at a higher risk of developing an ectopic pregnancy if they have the pelvic inflammatory disease.

The prevalence of chlamydia-related complications in male patients is much less than the statistics among the female population. Still, there is one particular concerning long-term complication that men can suffer if they obtain chlamydia and do not obtain treatment at an early stage of the infection.

In some rare cases, the presence of epididymitis can cause problems with a male patient’s fertility. This is usually the case of the condition goes unnoticed, or the patient fails to obtain treatment when the symptoms just start to develop. There are effective treatments available that can help men who develop this particular complication associated with chlamydia.

Complications In Men And Women

A number of complications have been found to be a risk factor for chlamydia in both male and female patients. The first concern is the fact that there seems to be an increased risk of being infected with the HIV virus in men and women who have acquired the chlamydia infection. At the same time, a patient with chlamydia and HIV are also more likely to transmit the HIV virus to another partner during sexual intercourse, compared to a person only infected with HIV.

Another concern that needs to be raised is the risk of Reiter’s syndrome. In modern times, doctors are rather referring to Reiter’s syndrome as reactive arthritis. This is a serious complication of chlamydia, but it is an exceptionally rare one. Even though rare, the possibility still exists – making it even more crucial for sexually active individuals to be tested for chlamydia frequently.

Better To Treat Chlamydia As Soon As Possible

Chlamydia is a treatable, sexually transmitted infection that can be effectively cured with a series of antibiotics. Unfortunately, however, many people fail to realize they have the condition, due to the lack of symptoms in the majority of patients who contract the infection. Without treatment, the condition can become serious and cause several complications, sometimes leading to long-term adverse effects in the patient’s body.