Home » Articles » Allergy » What is an allergy? 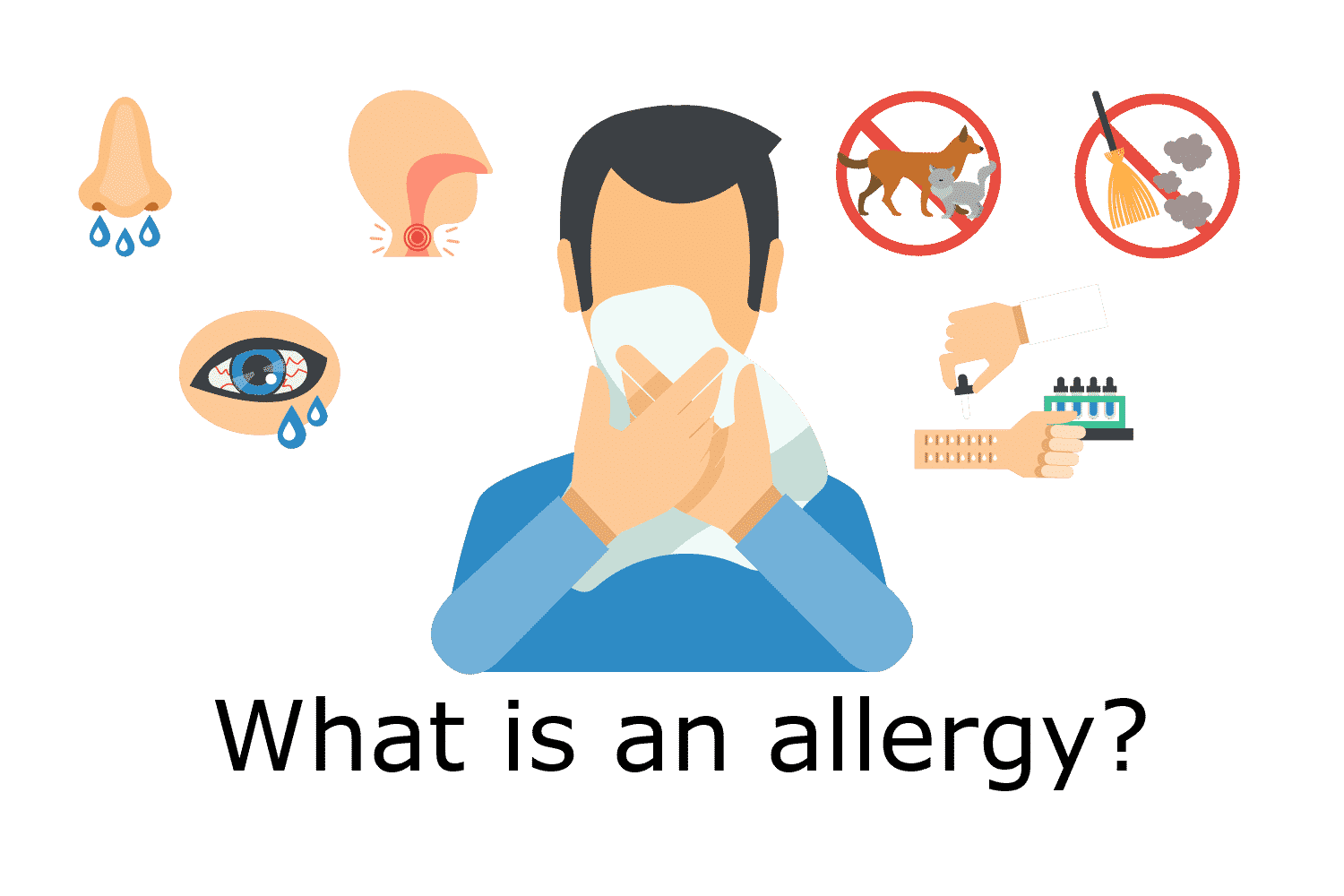 Allergic reactions could be mild or severe. Severe allergic reactions may lead to death if care is not taken. Different symptoms show up during allergic reactions. They include inflammation of the nasal passages, skin, sinuses, anaphylaxis. Allergies may also display other symptoms similar to everyday illnesses such as Hay fever — which is also known as allergic rhinitis. This can cause incessant sneezing itchy eyes, nose or mouth. It also causes the eyes to become red, watery and swollen (conjunctivitis) as well as a runny nose.

Food allergies, on the other hand, can lead to life-threatening situations such as anaphylaxis. It could also cause a tingling sensation of the mouth, swelling of the lips, face or throat.

An allergy which is as a result of insect stings can cause the part where stinging occurred to swell (oedema). It can also cause itching, cough, chest tightness, wheezing, shortness of breath and anaphylaxis. Atopic dermatitis which is also called eczema is an allergic skin condition which causes itching, reddening, flaking, and peeling of the skin.

Why our bodies react to allergies the way they do

The immune system of the human body acts as a strong defense mechanism for the body. It controls and determines how the reacts to foreign substances. If for instance, you are allergic to pollen, as soon as your body detects a pollen particle, it quickly recognises it as an allergen. This will cause the immune system to produce specific antibodies that will fight off the pollen allergens. The antibodies produced by the immune system are called immunoglobins (IgE). The immunoglobins travel to chemical-releasing cells, causing allergic reactions. It is this reaction that causes an evident reaction in different parts of the body such as nose, eyes, sinuses, ears, stomach linings, throats, etc. Immunoglobins show different specificity for different allergens. This explains why some people may be allergic to a particular type of allergen such as dust mites while other people may be allergic to different types of allergens (because they have multiple immunoglobins antibodies).

Allergic reactions can be triggered by a lot of factors which include:

iii. Airborne allergens such as pollen and dust.

iv. Penicillin or penicillin-based antibiotics are medications that can trigger allergic reactions.

v. Latex and other substances can also trigger allergic reactions.

Food allergies, insect sting allergies as well as other types of allergies often cause a severe reaction which is known as anaphylaxis. Anaphylaxis is a medical condition which is life-threatening and can cause what is known as anaphylactic shocks in individuals. Signs and symptoms of anaphylaxis include loss of consciousness, reduced blood pressure, shortness of breath, skin rash, lightheadedness, vomiting, nausea and rapid or weak pulse.

When to visit a doctor

You are advised to visit a doctor if you think your symptoms may be caused by an allergic reaction. Taking medications for your allergies without the doctor’s prescription may only provide a short-term effect. Hence the need to visit a doctor. It is also advisable to contact your doctor as soon as you start having symptoms as a result of the medications you took from the doctor’s prescriptions. In severe cases of allergic reactions, it is very important to contact the emergency services or look for medical help as quickly as possible. You could immediately give yourself a shot of an epinephrine auto-injector if you are in possession of any during severe cases of allergic reactions. Do not hesitate to go to seek emergency medical help even if you feel better after giving yourself a shot of the epinephrine auto-injector. This is to make sure the symptoms don’t return after the effect of the epinephrine auto-injector wears off.

If you have a record of severe allergy cases which resulted in anaphylaxis in the past, make sure you book appointments with your doctor occasionally. The evaluation, diagnosis and management of anaphylaxis for a long time is not an easy task. Hence you need to visit a medical practitioner who specialises in allergies and immunology. People who are likely to develop allergies are those who have a family history of asthma or other allergies such as hay fever, eczema, hives, etc.

There is an increased risk of other medical conditions such as anaphylaxis for people who have allergies. As your allergies become severe, there is an increased risk of anaphylaxis which is mostly triggered by food allergies, medication allergies as well as allergies from insect stings. Asthmatic patients usually have allergies. Hence one is likely to have asthma if they are allergic to particular substances. Asthma is known to affect breathing. There are cases in which asthma is triggered by being exposed to an allergen.

If you have hay fever or asthma, you may likely suffer from sinusitis, infections of the ears as well as lung infections.

In order to effectively manage or prevent allergies, you must know and also understand the type of allergy you have. You can also take precautions which include:

i. Keeping track of your symptoms.

ii. Avoiding the stuff that causes your triggers.

iv. Wearing a medical alert bracelet. This will enable other people to be aware of your allergies and promptly offer to help when you are seriously triggered by an allergen.

Several factors are why people have allergic reactions or triggers. However, you must know that your allergies could be manageable. You should be sure of the substances that trigger your allergies and make conscious efforts to avoid them. Always make sure you visit your doctor regularly and do not forget to wear a medical alert bracelet in case of serious medical emergencies.